Well I made it to the end of Creative Arts Today and one year’s work has been packaged up and sent to the OCA for assessment. Fingers crossed that I have submitted everything correctly!

It has been a turbulent year and this is a good time to pause and look over the last year’s work, putting down some final thoughts. 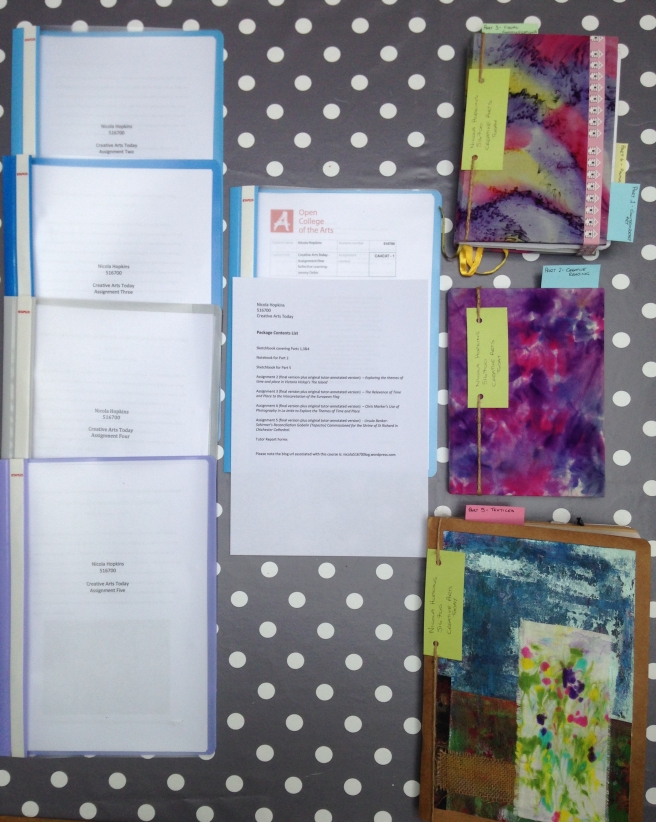 END_OF_DOCUMENT_TOKEN_TO_BE_REPLACED

Following submission of my draft of the essay on Victoria Hislop’s The Island, my tutor suggested looking at:

END_OF_DOCUMENT_TOKEN_TO_BE_REPLACED

Ideas from this book are possibly applicable to the Jeremy Deller and Chris Marker essays.

Morden traces the term documentary to John Grierson’s 1926 review of Robert Flaherty’s film Moana about South Sea islanders. Grierson linked documentary with the problems of the modern world seeing its task as guiding citizens through ‘modern life towards an active role in the democratic process.’ Film is able to ‘bring alive’ the subject in a way that a written article or photographic stills cannot? Perhaps because it mimics the way that we experience the world?

Documentary film is rooted in the belief in the transparency of the photographic image (recording and re-presenting reality) and has a political role. Morden suggests that it is ‘a means of communication not based on language or an interpretative schema’ but later contradicts this by discussing the importance of the concept of perspective…

Documentary is seen to be representative of reality by presenting the subject ‘in an unbiased way’ often filming on location and using native actors.

Documentary film was conceived of as a mediator between the State/commerce and the public. While it is often served as a means of propaganda for these institutions, it saw propaganda as a benign force, concerned with the communication of useful knowledge to the citizen.

Can propaganda be benign? Arguably those of opposing views will object? The Workers Film and Photo League was a documentary film movement concerned with political agitation and social change.

At the end of the 1930s Picture Post was launched in Britain. It was published in black and white and attempted to eradicate ‘all signs of interference’. It intended to remove any signs that a number of processes/decisions had been made in its publication. Conventions such as neutral grey, geometric layout etc implied connotations of realism, objectivity and impartiality. Encouraged viewers to read the images as objective – social realist documentary.

Later colour magazines would combine pictures and text to work together so that the viewer was encouraged to look across the page itself rather than see it as a window to the world at large. The subjects became ‘agents of spectacle’. By the 1960s photojournalists were expected to have a ‘visual style’ and possess attributes such as ‘heroism, perseverance, sensitivity, and…visual creativity’. This seems in direct contradiction, if the photographer’s style is evident then how can a photograph represent an objective reality?

According to Morden, photographic representations involve at least two reductions:

Contemporary theory has roots in semiotics- photography is a mode of representation. Mode is based on concept of perspective to create the illusion of three dimensions. ‘Perspective is not a condition of space but a condition of the perception of space… Perspective, then literally orders space for/around the viewer.’ ‘Photographic representations are only natural and neutral because perspective itself has a status which puts it beyond question.’ Real is taken as a given, the image stands in for reality and the viewer can distinguish between the image and reality. This formulation ignores that there is a complex relationship between language and consciousness – perception? This theory assumes that there is an ultimate ‘truth’ which is not in any way subjective?

Morden asserts that in a democratic society ‘political action must be directed towards reform’ as radical change in unnecessary. Any social injustice must be ‘considered as a local or isolated aberration’. In this theory, documentary exposes local problems. ‘Documentary informs all citizens so that they may act democratically and collectively to rid society of such ills’ – Would all citizens necessarily agree with what constitutes an ill. Morden makes the point that a ‘democracy which feigns equality only stands in the way of such change.’

Following submission of my draft of the essay on , my tutor suggested looking at:

END_OF_DOCUMENT_TOKEN_TO_BE_REPLACED

I found this final section of the course the most thought provoking. On reflection, it should be obvious that someone who has always played with yarn and started selling hand painted silk scarves would consider studying textiles yet strangely I started this degree determined to study painting. Looking at the huge variety of applications of textiles throughout this course and particularly reading through Bradley Quinn’s Textile Designers at the Cutting Edge made me realise how much further I could push those interests. Studying Part 5 has inspired a flurry of ideas ranging from the use of unconventional or recycled resources for clothing to the seemingly unending variety of methods for adding texture and interest to a fabric and including it in other artworks. The enthusiasm I have found in myself for attempting techniques has led me to decide to switch to textile art instead.

END_OF_DOCUMENT_TOKEN_TO_BE_REPLACED

Chichester has a history of commissioning religious tapestries: a Lurçat tapestry hangs in Bishop Otter Chapel and two tapestries hang in Chichester Cathedral, John Piper’s on the Sherbourne Screen and the Reconciliation Gobelin(also known as the Anglo-Germanor Benker Tapestry) by Ursula Benker-Schirmer on the reverse. The Shrine of St. Richard in the retrochoir of Chichester Cathedral was a destination for Middle Age pilgrims and many considered it the third most important site after St Thomas in Canterbury and the Virgin Mary at Walsingham. Ursula Benker-Schirmer’s tapestry was commissioned when Robert Holtby (Dean of Chichester 1977-1989) wanted to re-establish the shrine as a focus for pilgrimage. (Holtby, 1991) END_OF_DOCUMENT_TOKEN_TO_BE_REPLACED

In writing the essay for Assignment 4, I have attempted to demonstrate understanding of the historic and cultural contexts of La Jetéeas they seemed particularly relevant. It also seemed appropriate to reference later works by Chris Marker and others that were influenced by the film. END_OF_DOCUMENT_TOKEN_TO_BE_REPLACED

Chris Marker’s short film, La Jetéeis the story of a post-nuclear war time-travel experiment. Constructed almost entirely from photographs, Marker explores themes of time and place by subverting Oliver Wendell Holmes’ (1859) assertion that the photograph is a “mirror with a memory”. The viewer is left questioning whether the image that dominates the protagonist’s dreams, Orly airport viewing platform, is ‘real’ or a constructed memory; a place synonymous with travel, combined with Marker’s stills, invites the viewer to become a fellow tourist in time. Overshadowed by death, La Jetée encourages the viewer to ‘remember you must die’ (‘momento mori’ in Latin) by emphasising mortality and the fragility of life. (Wilson & Lack, 2016)

END_OF_DOCUMENT_TOKEN_TO_BE_REPLACED

I found the projects on “Film Posters” and “Join the Navy” most interesting. I enjoyed the challenge of applying semiotic analysis in an attempt to understand the symbolism of images in “Join the Navy”. The “Film Posters” task was interesting as, by comparing the two posters for the same narrative, it was possible to see how society and culture has changed in the intervening 52 years. (Hopkins, 2017) END_OF_DOCUMENT_TOKEN_TO_BE_REPLACED

The European flag (fig. 1) is widely seen on European Union (EU) products, online, citizenship documents such as passports and Customs signs at border crossings. Although designed to signify unity in 1955, Banksy responded to the UK’s EU referendum result in 2016 by creating a work that re-appropriated the flag, subverting its intended meaning. Semiotics suggests that there were two main ‘orders’ of signification: denotation (what can be seen) and connotation (possible meanings). Downs (2012) argues that there is a third-order of signification based on ideology. With this in mind, comparison of the EU flag’s design with Banksy’s work shows how time and place influences the flag’s interpretation and how appropriation in art raises questions of originality and authenticity in the Modernist tradition of asking “what is art?”. (Wilson & Lack, 2016) END_OF_DOCUMENT_TOKEN_TO_BE_REPLACED